If you are going to implement the data management function, you need to define what data management model you would like to use, and your first step is to look at existing industry reference guides. Your first choice will definitely be the DAMA-DMBOK Guide by DAMA International1. This is the most well-known and most frequently used guide in the data management community. If you work for a financial institution, your preference might go out to DCAM by the EDM Council2. The third main guide is TOGAF3, which is focused on Enterprise Architecture, but it also intercepts some data management areas like data, application, and technology architecture.  All guides are not “off-the-shelf solutions,” though. To some extent, they are similar, but let us take a closer look at various conceptual differences.

In the following figure, I have put together the metamodels of the two guides I have mentioned before: DAMA-DMBOK by DAMA international and DCAM by Enterprise Data Management Council. 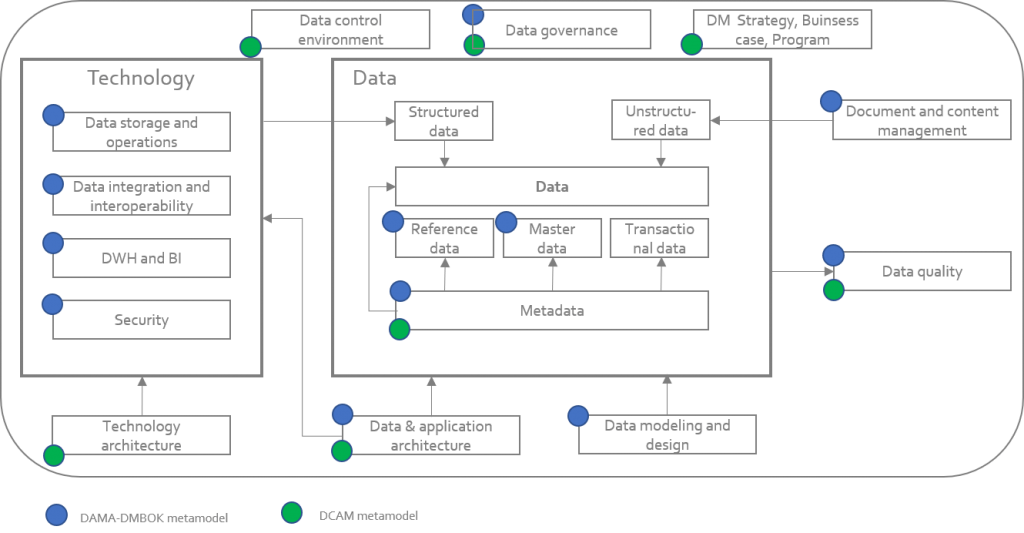 Let’s briefly discuss each of the metamodels separately.

The DCAM model is organized into eight core capabilities. This model was developed primarily for financial institutions, but, in my opinion, the model is actually rather generic and can be used in other industries as well.

Comparing the DAMA-DMBOK 2 and DCAM metamodels

From my point of view, there are several conceptual differences between DAMA-DMBOK and DCAM  data management models:

And this is just the beginning. If you dive into the DM business functions and capabilities content, you will face a lot of differences in interpretations and perspectives.

The figure above shows that some of the business functions/ capabilities seem to be quite similar. But is it really the case? A deeper analysis will show that, very often, these capabilities are only identical in their names but differ a lot when you look at their content and expected deliverables. Here are a few examples.

The key deliverables of Data architecture as per DAMA-DMBOK 2 are data flows and data lineage. Simultaneously, Data modeling is seen as a tool that could specify data requirements by developing conceptual, logical, and physical data models.

At the same time, DCAM recognizes the development of these models as outcomes of Data architecture.

Is it a problem that different data management guides speak different languages? Of course, everyone has a right to free speech, but from my point of view, such difference could cause major challenges, such as:

The examples I have presented in this article are only a few of the major challenges I have found while comparing the two major data management works. There are lots of other interesting points of discussion within the two guides. Are there any striking differences or similarities between DAMA-DMBOK 2 and DCAM that have caught your attention? Please share them in the comments section below!

About the Author: Irina Steenbeek

Irina is a data management practitioner with more than 10 years of experience. The key areas of her professional expertise are the implementation of data management frameworks and data lineage. Throughout the years, she has worked for global institutions as well as large- and medium-sized organizations in different sectors, including but not limited to financial institutions, professional services, and IT companies.

You can find out more about which cookies we are using or switch them off in settings.

This website uses cookies so that we can provide you with the best user experience possible. Cookie information is stored in your browser and performs functions such as recognising you when you return to our website and helping our team to understand which sections of the website you find most interesting and useful.

Strictly Necessary Cookie should be enabled at all times so that we can save your preferences for cookie settings.

If you disable this cookie, we will not be able to save your preferences. This means that every time you visit this website you will need to enable or disable cookies again.

This website uses Google Analytics to collect anonymous information such as the number of visitors to the site, and the most popular pages.

Please enable Strictly Necessary Cookies first so that we can save your preferences!